Hochhausblöcke is a neat skyscraper variant that showed up in the Rätselportal round. They’ve usually been less regular, but from the instructions it was clear that the one on the competition would be an 8×8-grid. I thought there was a good chance of a puzzle without outside clues, and certainly the interactions involved there need more practice, so I tried to construct such a puzzle. I kept running into dead ends, started doubting that they exist at all, and threw the computer at the problem. It turns out that there’s a lot, but they’re rare enough: there’s a good 200000 excluding symmetries, or a little under 1% of all clueless grids you could write down. It should not be unreasonable to find one by hand. Here’s one. 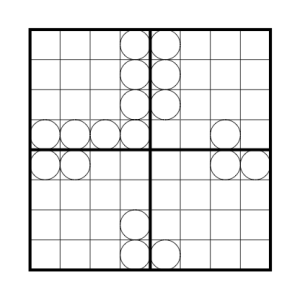