Here’s a team round I made for the Polish championships earlier this year. It was used for a casual team competition in the evening, between puzzle and sudoku championships.

It’s a two stage puzzle. The first part consists of dissecting some grids to form a set of pentominoes, which are then used as the pentomino set for a big Statue Park puzzle.

The puzzles are designed to be solved with a pair of scissors (i.e., cut up the dissection grids, then place the resulting pentominoes on the statue park grid). If you want to avoid that, you should be able to get a similar solving experience by only marking full pentominoes, and not marking empty cells for the Statue Park.

We went with teams of three in Poland, which is probably the best size for this.

Find the puzzles and original instructions below, or all in one PDF. (The PDF comes with the full Statue Park puzzle, and both halves as individual grids, for A4 printing.)

Pentomino Dissection Dissect the grid into pentominos (shapes of five cells). Letters prescribe the shape of the pentomino that contains them; pentominos may contain at most one letter. Reflected and rotated pentominos are considered the same shape. (Pentominoes are coded FILNPTUVWXYZ, see for example wikipedia.) 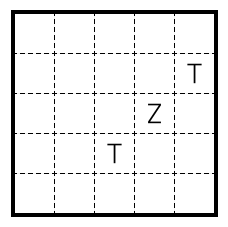