Last of the set. This is a type that really benefitted from preparation, it takes some getting used to. The contest puzzle ended up going mostly smoothly, unfortunately I ended up spending a lot of time resolving a non-contradiction in one part of the puzzle. 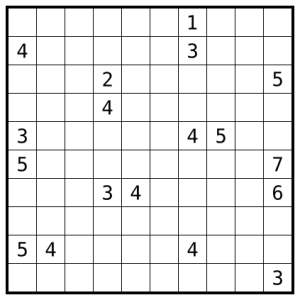 Rules Shade some cells to leave an orthogonally connected set of cells (the “cave”) that doesn’t enclose any shaded cells. All clues must be within the cave. Then draw a path through the cave that travels horizontally or vertically between cell centres that visits all unclued cave cells and doesn’t touch or intersect itself. This path passes through some (at least one) consecutive clues in ascending order, starting at 1 and going straight through any clue. The clue 1 is in the second cell of the path, the highest clue as in the second-to-last cell of the path. The remaining clues are usual cave clues: they count the total number of cave cells that can be seen in horizontal or vertical direction from that cell, including the cell itself.

See the puzzle wiki for German rules (that allow the usual Bahnhof crossings) with an example.